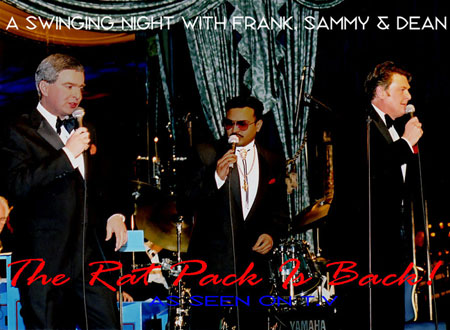 Relive again with the Opus One Band the camaraderie between three of the worlds greatest entertainers. Each one was a talent in their own right, when together the combination proved unbeatable. We recreate the totally ad-libbed and witty one-liners, the mickey taking, the heavy drinking and the friendly rivalry of theseworld phenomenons. Who can forget the relaxed swing of Dean Martin singing,“That’s Amore”, or Sammy Davies Junior’s lilting style in “Mr. Bo jangles”, but not forgetting the sock it to them approach of “ The Chairman of the Board” Mr. Frank Sinatra performing the “Lady is a tramp”.

Our show features David Alacey as Frank Sinatra, Harry Crawley as Dean Martin and Raul D’ mallio as Sammy Davies Junior, with the Opus One Orchestra and the option of a string section if required.
Top
Post Reply
1 post • Page 1 of 1

Users browsing this forum: No registered users and 1 guest